We’re living in a pretty crazy world right now, so maybe this alternative history story, in which that most American of superheroes, Superman, was raised in the Soviet Union and is a communist hero squaring off against the United States, doesn’t seem as quite as out there as it normally would. . . .

END_OF_DOCUMENT_TOKEN_TO_BE_REPLACED

In the middle of WWII, the German military was not especially enthused with the idea of tying up resources guarding troublesome POWs who kept wanting to escape. Now, to my mind, it would probably be more logical to separate all the troublesome prisoners from each other, but instead, the Germans decided to lump them all together in a special high-security POW camp. Probably not too surprising when you gather together dozens of escape artists, they end up orchestrating, well, a great escape. . . .

END_OF_DOCUMENT_TOKEN_TO_BE_REPLACED

Usually, I try to focus on newer movies and TV shows for my reviews, but while I was researching potential things to write about, I came across last year’s The Predator, a remake of the classic 1980s action/sci fi film Predator.

Now, if I were a fair-minded person, which I often claim to be, I would have given The Predator a chance.

However, I’m not really that fair-minded. Ever since I heard they were working on this remake, I just couldn’t get over the fact that there was no reason to remake the movie. I’d have been much happier if they’d just re-released the original in theater.

Because if you’re looking for a veneer of outrageous, over-the-top 80s action overlaying a far more complex science fiction tale, then you can’t do better than Predator.

So, for that reason, this week I’m reviewing the original (and best) Predator.

END_OF_DOCUMENT_TOKEN_TO_BE_REPLACED

We’ve been focusing on schools this month, but not everything worth knowing is learned in school. Sometimes the school of hard knocks delivers more memorable lessons. . . .

Daniel Dravot and Peachy Carnahan have decided that the 1880s British Empire does not appreciate their talents. And the two former British army sergeants do have a point. They feel like they’ve contributed more to building the Empire than administrators and British authorities, who are less than appreciative of their military exploits or how they have occupied themselves once they were discharged. Specifically, the powers that be are not pleased with Danny and Peachy leaving a trail of blackmail, fraud, and smuggling, among other things, in their wake.

They know that going home to England would mean menial work, which doesn’t seem very enticing given their adventures in India. But they also realize that further prospects in India are now limited, as well.

The two friends, thus, decide that they will go away to the remote, mysterious kingdom of Kafiristan. Once there, they will use their martial skills to serve as mercenaries and ingratiate themselves with a local chief as a stepping stone for them staging a coup, setting themselves up as rulers, and robbing the locals of their wealth. It’s not a retirement plan endorsed by most financial planners, but Danny and Peachy are pretty sure it will work out marvelously for them. What’s the worst that could happen?

END_OF_DOCUMENT_TOKEN_TO_BE_REPLACED 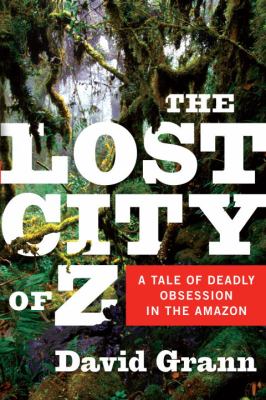 It’s one of the great mysteries of 20th century exploration: what happened to Percy Fawcett?

The British military officer, surveyer, and explorer was one of the key figures in mapping and exploring the Amazon. He had become obsessed with the belief that, contrary to what other experts claimed, a large, sophisticated civilization had once existed in the dense jungle. He named that mysterious place “Z,” and he very badly wanted to find it.

In his late 50s, the undaunted Fawcett, his eldest son, and his son’s best friend plunged into Amazonia in 1925, determined to prove the world wrong. They were never seen again.

Much as how centuries before Fawcett conquistadors disappeared looking for the city of El Dorado, dozens of adventurers have also disappeared trying to locate Fawcett and/or “Z.”

After reading and enjoying David Grann’s Killers of the Flower Moon earlier this month, I decided to give his first book about Fawcett and his disappearance, which was recently adapted into a film, a try.

Beware, there be some mild spoilers ahead.