Next week marks the 131st birthday of noted hardboiled writer Raymond Chandler. You may or may not recognize Chandler’s name, depending on your familiarity with the genre, but you’re sure to have heard of his most famous creation–private eye Philip Marlowe.

And what better way to celebrate Chandler’s birthday–or just get in touch with some great classic detective fiction–than to revisit his work and adaptations of it?

If you want to start chronologically, this compilation of early Marlowe novels, which includes classics like The Big Sleep and Farewell, My Lovely, as well as stories from his pulp writing days, is a solid option.

*There is also a pretty good selection of Marlowe novels as ebooks on Libby.

Later Novels and Other Writings 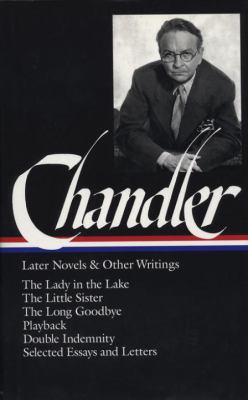 If you’re more interested in Chandler’s later work or just want a broader sampling of his material, this collection might be a better option. It features more of his classic Marlowe novels, as well as a movie script and selected letters and essays.

For folks who haven’t read Chandler’s work, Marlowe probably looms in their mind as one of the actors who has famously taken the role, with Humphrey Bogart being one of the most iconic. In this story, Bogart teams up with his wife Lauren Bacall to bring one of Marlowe’s more famous stories, wrought with blackmail, kidnapping, murder, and more, to the big screen.

Strangers on a Train/Double Indemnity

Though Chandler is justifiably best known for his own work, he also worked in Hollywood as a scriptwriter, including adapting other writers’ works for the big screen. He worked on Alfred Hitchcock’s thriller Strangers on a Train (adapted from a Patricia Highsmith novel) and noir classic Double Indemnity, which is actually based on a James M. Cain book.

My next two suggestions are a little more off-the-beaten path, but bear with me:

Okay, on the surface, classic 1970s private eye show The Rockford Files has nothing to do with Chandler, Marlowe, or Bogie. But it totally does! And not just because star James Garner once played Marlowe on film.

It’s been argued–and I agree–that nothing from the 1970s captures the tone and atmosphere of Chandler’s original stories quite so well as this show.  Also, the showrunners seemed well aware of this and even throw in little Easter eggs for Chandler fans, like borrowing his fictional setting of Bay City. I’ve been watching this show for the first time lately and am pleasantly surprised by how well it holds up 40 years later.

This 1980s HBO show is hard-to-find and, in fact, is not in our system. (It’s too expensive and obscure for me to justify doing a purchase request for it.) However, we can get it for you on ILL. It’s well worth watching. The late Powers Boothe was best known for his long career of playing movie and TV villains, but his performance as good guy Marlowe is one of his best. (In fact, he’s my favorite depiction of Marlowe.) The sets and costumes are remarkably authentic, too, and help create a wonderful classic noir atmosphere.