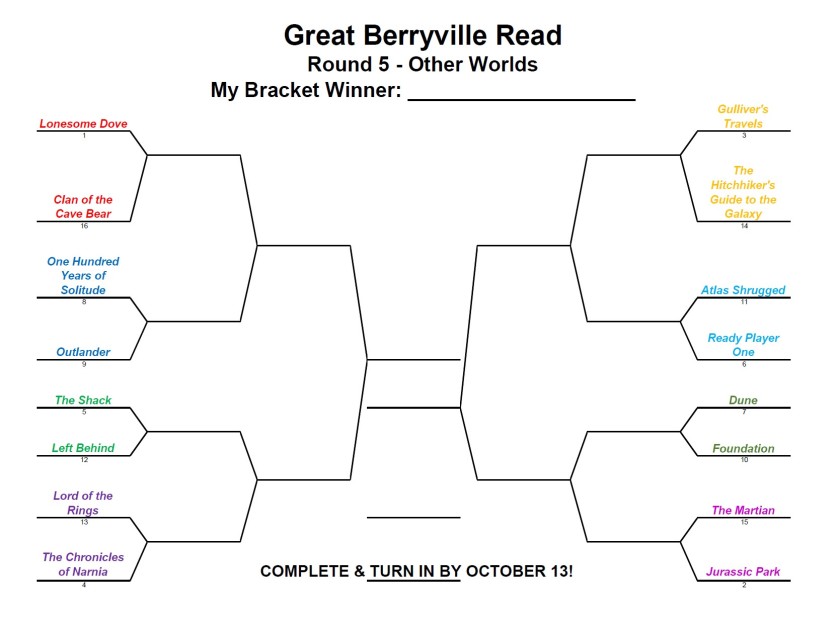 The Great American Read‘s most wide-ranging episode is undoubtedly its October 16th “Other Worlds” episode. The selections include historical fiction, fantasy, dystopian fiction, and science fiction.

In the process, it asks viewers what is their favorite type of “other world” to escape into through literature. Do you prefer to dive into the past with historical fiction or travel to foreign countries or venture into outer space or even transport yourself to other worlds entirely?

I honestly am pretty open to traveling just about anywhere through literature. A particular favorite is historical fiction. This will surprise nobody who knows me since I’m a history buff who reads a fair amount of historical non-fiction too. As a general rule, I’m not picky about when it is set just as long as it is good.

Traveling to another country, in both works set in the here and now or those set in the past, is also something I’m always game for. Books have given me a ticket to travel from the wilds of Siberia to the cities of Europe and Asia, all for free.

I’m not the world’s biggest fan of science fiction, to be honest, especially if it involves outer space. I have no idea why, but space has never intrigued me, and the minute a spaceship pops up, I am dubious. (The exception to this rule is The Hitchhiker’s Guide to the Galaxy, but that made me laugh, which is not a characteristic I associate with this genre, either.) In fiction especially, I tend to associate space-related science fiction with stories dense in technical detail. I do not associate that with a good time. Convince me I’m wrong!

However, I do love well-crafted fantasy worlds. I particularly love when a writer gets deep into world-building. It is incredibly rewarding to me as a reader when that world becomes truly immersive. Tolkien’s Lord of the Rings series is a standout in this respect. The guy literally created his own languages! (Though the series isn’t listed in this bracket, I also have to give a shout-out to George R.R. Martin’s A Game of Thrones series for superb world-building as well.)

As a sub-set of fantasy worlds, I also enjoy a good dystopian novel. There’s a reason few people write utopian stories, but dystopian tales abound. It’s a nightmarish immersion inevitably but a thought-provoking one, and I like when literature requires us to stop and truly think about its themes and scenarios. It also makes me grateful for the real world we get to live in, even with all its trials and tribulations.

What’s your favorite “other world” you have ventured to while reading Which of these genres do you prefer? Am I wrong to dislike stories about outer space? Tell us in the comments!

And don’t forget to vote–both on the Great American Read website and on our own Great Berryville Read brackets!