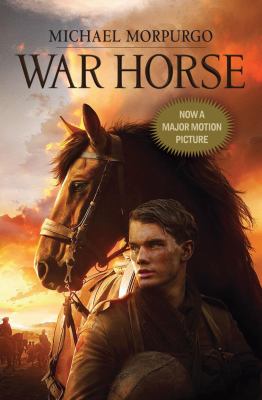 Joey is just a lovely, somewhat high-strung bay horse, living on a small Devon farm, with his beloved teenaged owner Alfred when World War I breaks out. He’s soon sold to the British military and, thus, begins Joey’s odyssey as a military horse for both the British and the Germans. Along the way, he meets several owners and finds himself doing everything from charging into battle to hauling artillery to pulling ambulance wagons.

Though I love animals, I tend to shy away from reading books about them. As a child, I found the depressing ending to Where the Red Fern Grows deeply traumatizing, and it made me cautious about reading or watching stories heavily focused on animals. So, with that being said, I have always been a bit curious about War Horse but refused to read it or watch the 2011 movie adaptation because I just had no interest in experiencing something as depressing as Where the Red Fern Grows. Seriously, why is that book/movie even marketed toward children?

War Horse is certainly sad in parts, but it’s ultimately a heartwarming story. The depiction of World War I succeeds in conveying the misery of the trenches and the war but without being unduly graphic. In fact, even though I’ve read a fair amount of nonfiction about WWI, I’d never paid too much attention to the role of horses in that war, so the book was a great introduction to the many roles horses played for soldiers on both sides.

It’s also a compact book. It’s just a little over 160 pages and can easily be read in one setting, especially since the story itself is compelling and maintains your interest throughout. Technically, it is a children/s/YA book, but I didn’t feel like it necessarily read like one. I think readers of all age will like this story.

Though I did enjoy the book, it wasn’t perfect. Those flaws were relatively minor and didn’t prevent me from enjoying it. One inevitable problem with a book that features a horse narrating its experiences as it passes through several owners is the comparisons it will draw to Black Beauty. There were a lot of similarities, I thought, between the stories. Ultimately War Horse has its WWI-era setting to help distinguish it from its famous predecessor, so the similarities are most glaring early on when Joey is a young horse still on the farm. But I thought Black Beauty did a much better job of giving the various owners individual personalities. In War Horse, quite a few of Joey’s riders seemed pretty interchangeable to me, minus nationality and occupation.

One thing I actually found more distracting is that Joey didn’t always seem like a horse. One aspect of books narrated by unusual narrators that I particularly enjoy is how they approach and view things they are unfamiliar with. It’s always interesting to me how an author will choose to present an animal viewing something they might not understand. That doesn’t really happen much in this story. Joey is pretty well up on anything he encounters and never expresses much equine confusion at baffling human ways.

One that particularly stood out to me was that Joey, who had lived his entire life in rural England, seemed to have no difficulty understanding both French and German when he switches owners. Granted, I have some issues with overthinking logistics in stories. When I was a kid, I was always so puzzled that Arnold Schwarzenegger’s terminator had an Austrian accent and none of the other terminators did. I developed several theories to explain this inconsistency and was bitterly disappointed that this was never once explained in any of the movies. Who am I kidding. That still bothers me to this day.

Despite these occasional distractions, I thought War Horse was an engaging, fast-paced, and unique look at World War I through the eyes of a horse. If you’re interested in reading it, just follow this link to our online library catalog.

Recommended for those who enjoyed Anna Sewell’s Black Beauty.