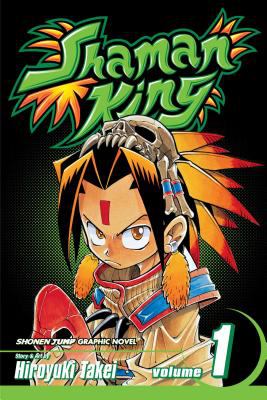 To manga or not to manga.  For me, it was a big NEVER, until last week.  I know this may be an inflammatory statement on my part, for some of you.  But it is the truth.  I had never read any manga and had never really wanted to read it.

However, a few months ago when I was at Books in Bloom, some of our teen volunteers were taking a break at my table, and I made them give me reading suggestions. Bradley told me I needed to read Death Note, and Dustin recommended Shaman King to me. I finally got around to reading their suggestions, and I’m happy to report that my introduction to manga was an enjoyable experience. (Thanks for the great recommendations, guys!)

I thought both books did a good job of setting up interesting premises that then evolved into action-packed, fast-paced storylines. I read both books in one sitting apiece because they both had addictive plots that made it impossible for me to set them down. I also thought both authors did a good job of effectively introducing the mythology surrounding their series throughout the story. I picked up both books not knowing much about them, but I didn’t find the stories hard to follow at all.

One reason I had never been interested in manga is the art style doesn’t really appeal to me–I think it’s usually a bit too stylized for my taste. However, I really did enjoy the artwork in Death Note. I also enjoyed how complex the story’s characters were and the philosophical discussions it introduced about the ethics of how its main character intends to use the death note (but without being too heavy-handed).

Shaman King was a lot more lighthearted, which I appreciated–I loved its sense of humor and how it didn’t take itself too seriously. I also liked how it took its time introducing the main character and his ghost companions before introducing the actual antagonist and overarching storyline.

Just be forewarned that both books end on cliffhangers, so be prepared to read the rest of the series to find out what truly happens!

Have you read either of these two series? Do you like reading manga? What’s your favorite manga series? Don’t forget that you can find more information on both of these books on our online library catalog.